I spent the last two nights sleeping on the floor, keeping vigil over my buddy. I felt like a new momma again, waking at the littlest noise, checking to see if Shadow was still breathing. Night number one was hard: he had just come out of surgery and moved pretty well, but the anesthesia hadn't been completely metabolized and he panted for most of the night. In the dark hours of the morning, Shadow began to whimper. Nothing too horrifying, but enough to know that he was in pain. Only a constant hand on his head kept him completely calm.

Last night, number two, was much easier. Shadow looked at me several times as the hours crept by--we were nose to nose--but he must have been resting as comfortably as he could. He didn't whimper. He didn't pant excessively. His breathing was steady and strong. He took his meds easily at 3:40 a.m.

We have to wait for the biopsy results to come back before we have a better idea of the outcome for Shadow. But using ultrasound to diagnose, the vet believes that Shadow has cancer, more specifically hemangiosarcoma of the spleen. (The mass that was taken out, along with the spleen, was the size of a tennis ball.) Golden retrievers are prone to this type of cancer, and while some of the masses that are taken out are benign, a larger percentage of them are not.

Thankfully, the vet didn't find any metastases on the chest x-ray. If she had, the most humane thing to do would have been to do say our goodbyes and send him on to the great backyard in the sky. The cancer not having metastasized means his prognosis is slightly better but the outlook isn't great. Even after surgery, he'll likely live less than a year.

How can that be? Don't we all think that our animals will be with us forever? Aren't animals supposed to be invincible? They're our friends, our families. Some of the most integral players in our lives, and we're expected to let them go so easily, aren't we?

I'm not ready to say goodbye now. I won't be ready in two weeks, or two months, or even six months. If we're lucky and Shadow lives for another nine months, I won't be ready for him to go then, either. But I'm grateful that we at least have some time to prepare ourselves for his loss and that we're able to make these last months of his as wonderful as (or even greater than) any that have come before.

It's time to celebrate Shadow. Feel free to come help us do so. 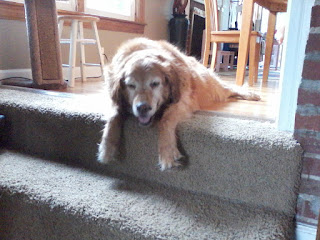 Posted by Christina at 7:55 AM

we love you Shadow!