A Lesson in Toasted Oats

Every morning of the week, I eat toasted oats for breakfast. In fact, if I have a choice of a large breakfast, complete with eggs, toast, potatoes, and fruit, I will choose the bowl of toasted oats. I much prefer a smaller breakfast, and would rather eat the larger meal at lunchtime.

What I've learned over the last year, though, is that I'm more particular about my toasted oats than I originally thought. As in, I apparently won't eat just any toasted oats.

So what happened? I know you're dying to know...

A week or two ago, when I was at Meijer, I remembered that we were getting low on toasted oats. (It's not that I have anything against Cheerios, per se--they are tasty--but they are also expensive. Of course, all cold cereal is a little pricey when you compare it to other foods, but I digress.) I made my way to the cereal aisle, grabbed a box of the store brand toasted oats, and eventually made my way home. 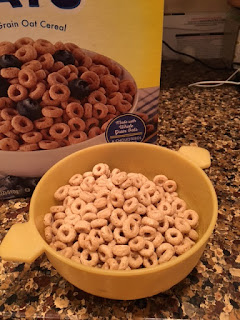 When it came time to open the package and eat the cereal, though, it became very clear--within two bites,really--that my belief that not all toasted oats are created equal is true. I had already figured this lesson out earlier in they year when I purchased a box of Millville Crispy Oats. That cereal, in my opinion, tastes like cardboard. It was so bad that I actually threw the entire box out. Well the Meijer brand tasted only minimally better to me.

Why hadn't I noticed all of this before? Probably because I usually buy the Kroger or Trader Joe's brand of toasted oats.

What have I learned? That I must stick to those three brands--Kroger, Trader Joe's, or Cheerios--if I want to start my day off on the right foot. And I'm all about starting off the day properly.

Never do Meijer brand anything.

Some of their things are okay. But I do think I like the Kroger brand better for so many other things.

Millville is awful!! And I miss Kroger... it was my store of choice when I lived in Illinois.