The day passed as it always did these days. With little fanfare and a plethora of tasks to perform. When had the mail stack risen so high? And how much laundry did he have yet to do? How in the world would he get it all done in a day? He didn't know, and he knew he'd find no sympathy from her. At this point, she'd convinced herself that she still took care of everything. Well, everything but the cooking. She knew she didn't do that anymore.

The only reason he knew any of her perspective was because he caught her on the phone with one of the girls. He heard her end of the conversation over the din of the kitchen television. The Hallmark Channel's most recent made-for-TV movie seemed to have the most hideous music.

"Oh, I still do all the housework," she'd said into the receiver.

He wished he could hear his daughter's reply, but as much as he craned his neck, the phone volume couldn't win against the noise from the TV. Not sticking around to hear anymore, he trudged down the stairs to the computer room. A bit of cool air and a round of Minesweeper and he knew he'd feel better.

But as he lowered himself into the chair, he knew that nothing would make him feel better, and he placed his head into his hands. 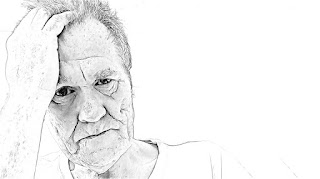 "What am I to do?" He asked the empty room, hoping that the silence held an answer for him. "What?"

"Who are you talking to?" Somehow his wife had snuck up on him and there she stood, leaning against the door jamb. "Who?"

Her eyes, wide and round, flared with fear and he remembered what the doctor had said. That paranoia could appear as if out of nowhere, and that he had to learn how to talk her down. But he didn't know how. He hadn't practiced. He watched as his wife strode across the room, checked the windows--making sure the latch was on--and then did the same with the door to the garage. Her hands shook and the look of her skin, pale and clammy, made him realize that he was in way too deep.

"What am I to do?" He asked the empty room again. And again, he heard nothing but silence.

Email ThisBlogThis!Share to TwitterShare to FacebookShare to Pinterest
Labels: fiction is a wonderful thing, my loved one has Alzheimer's

Wow! Good story. I want to give this man a hug.