If anyone had filled me in back in 2012 and told me how difficult and time consuming it would be to try and publish a novel, I don't think I would have believed them. But now, here we are past the middle of 2016 and I'm working on revising a novel I started on Father's Day of 2012.

I remember the exact day because the inciting incident of this particular novel actually stems from an encounter I had that weekend. I drove home from the grocery store, a story brewing in my head, and furiously pounded out a few sentences. For months I went back and added a few notes here and there, and then, sat back to let the story percolate. During that time, I wrote and revised a second novel, and finished up a third book that, to this day, has been spending time on my bookshelf, collecting dust.

The Father's Day novel, though, is special. It's been read by a published author, who gave loads of valuable feedback. It's been workshopped by my writing group partners, who gave even more feedback. And the story itself? It's a good one. I truly believe in this story.

But two years ago, well before the novel was really ready to go anywhere (but I thought I'd start querying anyway) I had an agent show some interest in it. "The ending is too sad," she said. At the time, I didn't care and figured that she was just giving me a silly reason for why she didn't want to take the story on. I clung to my original ending, and justified myself by saying, "So what if it's sad. I'm the writer. It's my work."

Last week, though, I took a trip to see a priest. Why might I have done so? Because my protagonist, Sadie, seeks guidance from her local priest and I needed to make sure that the scene in the novel screamed authenticity.

From the moment Father P opened his mouth, I knew I'd made the right decision. In the span of under 30 minutes, he not only gave me a couple of awesome phrases to use in my book (permission granted) but he made me realize that maybe, just maybe, my ending is wrong. Not because it's too sad, but because it is, quite simply, THE WRONG ENDING.

The moral of this story? Always be open to listening to what those around you have to say. And don't always think that you're right. You might be surprised at what you can learn. 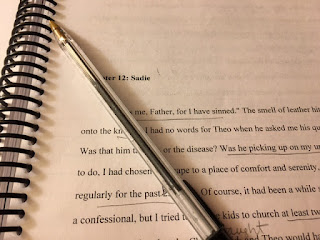 I'm so excited for you, Chris! I love to hear stories of how our muses work. Ultimately, I believe, this journey is about making Art, not making Money. So, your insistence to keep your orginal ending is consistent with Making Art. Seeking integrity for your protag. as you did in speaking to a priest merely exposed you to a new brushstroke, a different color, the Art can always be revised because sometimes we need to lean in a bit closer. The muse whispered.

Great reminder! Always be open in life as well as writing! Best of luck as you explore a possible new ending. It'll be great whatever you create.

I want to hear more about this - and to READ it!

I'm very intrigued at what could be labeled 'too sad' ...I love to read a sad story.