Put me in, coach!

I'm playing in an adult baseball league this season. It's been just about ten years since I've played hardball, so my goal is to avoid embarrassing myself or my teammates. We had a scrimmage tonight against one of the other teams in our league.

The directions to the ball park were along the lines of: Drive north until the highway ends. Follow that road through a few towns. Go past the grain silo, and park on the other side of the street. The air smelled of manure, but we had a baseball diamond, two teams, and an umpire.

My first at-bat was in the second inning. We had a runner on, and nobody out. As soon as I walked up to the plate, the umpire sent me back to our dugout because I forgot to put a helmet on. Yeah, that's too many years of slow-pitch softball. Ok, so we'll try again, this time with a helmet on my head. The catcher was kind enough to tell me about a soft spot in the dirt right outside the batters box. If he only knew that I didn't really care about making it to first base -- that all I wanted to do was put the ball in play, somewhere -- anywhere -- in fair territory.

The first pitch was a fastball, middle-inside, and just above belt high. Really, I was planning to take a few pitches, but I just couldn't let this one go. Back through the middle and into short center field. A single! A bona-fide base hit! I wasn't expecting a base hit until July, but there it was, the end of a ten year slump. The batter after me walked, and the batter after him drilled a single to drive me in. It was a very good inning.

My next at-bat came a few innings later. I was thinking to myself that I'd already gotten a hit, so no matter what happens at this at-bat, it was a good night. I also remembered to put on a helmet. There was a new pitcher on the mound, and the catcher once again reminded me about the soft spot in the dirt. This time, I thought, I really ought to take a few pitches to get used to seeing the baseball again. I took the first pitch, a fastball on the outside corner, for a strike. The second pitch was a curve off the plate. The third was another fastball that got a little more of the plate than the first pitch. I stayed on this one and lined it into left field for a stand-up double. Two hits!

We played until it was too dark to see, and we might have been up by a run when the game ended, but I don't know for certain. It didn't matter. A bunch of old guys played baseball, nobody got hurt, and I got to remember how good it feels to hit a ball with a wooden bat. Oh, did I forget to mention? No aluminum, no carbon nanotubes, no scandium or any other rare earth metals. Baseball bats are made out of trees in this league.
Posted by Timmy at 11:00 PM 1 comment:

The dude and the cube 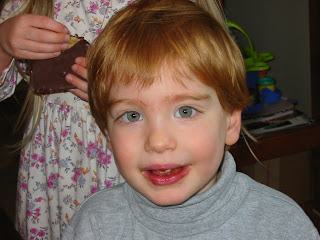 Unfortunately, this didn't happen when I was home, but Chris told me all about it. My sister got Aaron a Rubik's Cube for Christmas, and he enjoys messing around with it. The cube was in one of its 4.3 x 1019 configurations, and, according to Chris, sufficiently randomized. Well, Aaron looked over the cube and then he started twisting. Then he'd stop, look at it a little more, and start twisting again. After six or seven minutes of effort, he had the cube looking like this. 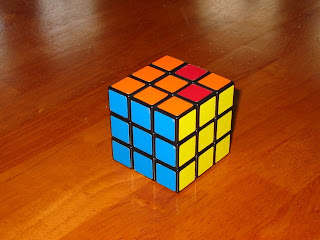 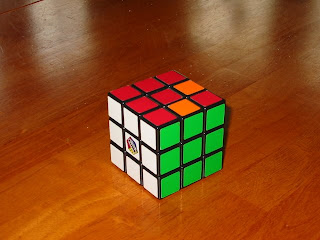 He handed the cube to Chris and told her to finish it because he couldn't figure out how to do it himself. I wish I had been there to see the look on her face. She told Aaron that she didn't know how to do it either, so they'd have to wait until I got home. When I got home, they showed me the cube. I took the pictures and then finished it for him.

Is my boy a mathematical genius? Could be, but that has nothing to do with nearly solving the cube. Cue up my inner skeptic: the cube was probably in a friendly configuration that just looked random: (RDLU)n, or something like that that's easy to undo. Nevertheless, it's pretty cool that Aaron took it as far as he did, and as soon as he's ready, I'm going to teach him group theory.
Posted by Timmy at 9:49 PM 1 comment:

To wrap up a little unfinished business, here are some photographs from the heart dissection. There was no squeamishness from Z&T about touching the heart, putting their fingers inside the chambers, and even about cutting parts of it open by themselves. On the contrary, they were almost as excited about this as Chris was. But they did ask if the cow from which the heart came was still alive. 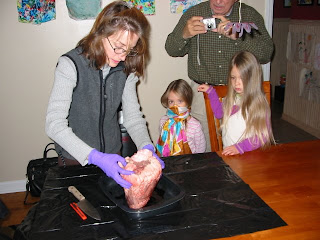 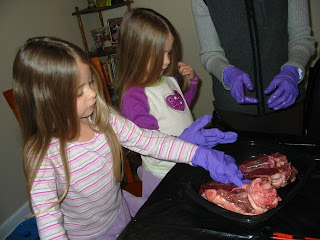 You gotta have heart

This happened around Halloween 2007. The recounting below is from an email message I sent to a few friends.

Warning: this is what happens when you marry a physiologist. I've pieced together the dialogue as best as I recall.

As many of you know, Chris teaches anatomy and physiology part-time at the Community College. On Wednesday night, she came home from class with a large paper bag from Dorothy Lane Market --- sort of the equivalent of Merchant of Vino, for the Ann Arborites in the audience --- and was abundantly excited about the contents of the bag. She told me to guess what she had. I was thinking brownies, cake, or cookies. Maybe sushi. Hopefully something with chocolate. Chris reached inside the paper bag, and pulled out a large zip-lock plastic bag containing something about the size and shape of a football, except that it had blood vessels transversing its surface, and one region near the bottom was covered in yellow fatty tissue. You didn't have to be a biologist to recognize it, though.

Her reply came through an enormous smile, "Yeah, it's a cow's heart."

"What are you planning to do with it?"

"We're going to dissect it."

"Zoe, Talia, Aaron, me. It's ok. I'll cut; they'll watch." Z&T spend a lot of time looking though Chris's anatomy & physiology books, and are very proficient at identifying parts of the body (interior and exterior), so I figured they'd get a kick out of having biology lab in the house. But a few questions lingered.

"Put it in the refrigerator."

"As in, the refrigerator holding the food that we eat?"

"Sure. It's from a butcher's shop, so it's not like it could be diseased or anything."

I acquiesced, and into the refrigerator the heart went. I later learned that one of Chris's students decorated her garage with various animal parts for Halloween, and she obtained these parts from a butcher. Chris got the cow's heart from her student. Apparently, the butcher made her (the student) sign a form agreeing, among other things, that she would not attempt to eat or serve this stuff. Are requests for these animal parts so frequent that butchers keep forms at the ready for customers to sign?

That was two days ago. The heart, which was frozen, is thawing in our refrigerator. I think the dissection is scheduled for this weekend. I am, I have to admit, kind of excited to watch, and to see what the kids' reactions will be. Maybe I'll even get to cut a little bit.

Post-mortem: The dissection did happen. Aaron watched, while the girls poked, prodded, and cut the heart. Z&T had a great time. Pictures of the event exist. I'll post them when I can.
Posted by Timmy at 9:17 PM No comments:

Vomit is not one of Santa's reindeer

So, we were supposed to go to Michigan last weekend for our niece's first birthday. On Tuesday evening, Zoe came down with a case of the pukes. The all-night long pukes. We kept her home from school on Wednesday, but sent Talia, and told Chris's family that as long as everyone else stayed healthy, we'd see them on Saturday. Zoe seemed fine by Wednesday evening, so she went back to school on Thursday. Little did Chris and I know that Zoe actually threw up again Wednesday night, but got it entirely in the bowl we'd left by her bed. Clever little thing that she is, she hid the bowl because she didn't want to miss school again. When we found it on Friday, the girls tried to claim that the cats did it.

Nevertheless, we were still thinking that we'd be able to make the trip to Michigan. And then Friday night happened. Around 11 pm, we heard Aaron start to puke. I ran into his room and cupped my hands in front of his mouth to try to catch the vomit. Because of the darkness, I was unaware of the half-gallon (the boy's an eater) of partially digested food he'd already gotten on his blankets, sheets, pillow, and beloved moose-moose. The pint or so I'd managed to "save" was worthless. Aaron went into the tub while his PJ's, bedding, and moose-moose went into the laundry. After his bath, Aaron decided he wasn't quite ready to go back to sleep, so he and I were downstairs for a little while to let Chris try to get some rest. He threw up three or four more times during the night, and we decided that Michigan was a no-go.

By Saturday morning, Aaron seemed to be almost back to normal. We kicked the soccer ball around and did our usual Saturday horse-play. Because I haven't stopped typing yet, you know what happens Saturday night: it was Talia's turn. By now, we're used to it: strip the bedding, put the child in the tub, and expect maybe four more regurgitations. It was probably the fourth or fifth load of laundry we'd done since Thursday. We decided I'd be on bucket duty in the girls' room. About two in the morning, after she'd thrown up two more times, my stomach started to feel unsettled. Hooray! My turn!

As of Sunday night, nobody here has thrown up since 4 am Saturday. We're very glad we didn't experience this in the car on the way to Michigan. We stayed in our pajamas all day, and all three kids got bathed again. Amazingly, the pregnant lady is the only one who hasn't puked.
Posted by Timmy at 11:59 PM No comments: