What Older Siblings Can Do To You...

The kids all love Melina. They love her so much, in fact, that they like to dress her up with different things they have received/found/made. 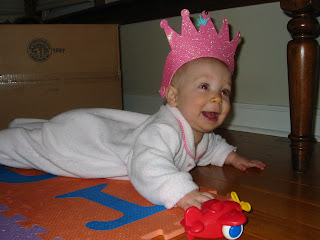 Above, she has a crown on, and is doing her best imitation of a princess, I guess. 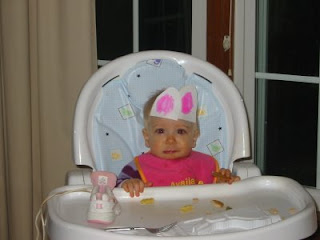 If you can't tell what those things in the second picture are, they are bunny ears...as in Easter Bunny ears. And yes, they are taped on! She didn't seem to mind too much (although her face seems to say 'Wha?'), so we went ahead and took the picture.

Melina will get back at them someday, I am sure.

P.S. We have yet to get a picture of Melina wearing a curly brown wig. Stay tuned.
Posted by Christina at 9:47 AM No comments:

A Boy and His Dog and Other Stuff

I should be sitting here doing school work, but instead, I am thinking of Aaron. Imagine that. I probably have thoughts of the other kids going through my head, too, but lately, I’ve been observing Aaron and his behavior when Zoe and Talia are at school, and Melina is asleep.

Aaron is a very imaginative child, and one that loves to play by himself. Don’t get me wrong, he does like to play with other kids (especially his sisters). However, he can amuse himself, literally, for hours. He will build towers out of blocks, draw pictures, erect marble runs, and dig holes. He talks to himself, describing everything that happens, or what should happen, and sometimes, calls out to me. But I think his best bud right now, aside from Melina, is Shadow. The two of them head outside to frolic in the sun, and what goes on out there, I’ll never know.

The other day, I was looking out the back door at the two of them, the sun shining off of the twin redheads, and I actually got tears in my eyes. I am pretty sure I teared up because, despite the presence of the dog and the look of glee on Aaron’s face, he was out there without another person. I needed to be inside at the time, and to be honest, Aaron didn’t ask for me to be out there, but sometimes, I wish he had a friend that lived next door. Was he lonely? I don’t think so. Would he have preferred to be playing with someone? I don’t know. I do know that as soon as his sisters came home from school, he followed them out to the front yard and had a blast being with them.

I hope he has a good balance of alone-time, sisters-time, mommy-time, and daddy-time, and I think he does. All I can say is, thank goodness for Shadow. Despite the barking, the mud tracking, the constant "I need some attention" behavior, he clearly earns his keep by keeping Aaron company. So thank you, Shadow. I guess you do make my job somewhat easier.

We haven't posted much here because we've been very busy. We've had visitors (two sets of grandparents at two separate times -- thank you to both sets for coming), spring break, and germs (Melina had a bad cold). It has been a little hectic, but fun. Taxes are now done (thanks Tim) so we'll put up some of the nifty pictures we took over the last couple of weeks and at Easter in the next post.

Aside from that, the only other thing happening in my world is my class. I am teaching Biology 142 this quarter, which just happens to cover muscle and nerve. I am excited about that. What? You aren't? I love teaching about the neuron, what it looks like and especially how it works. Moving on to muscle makes the first month of the quarter always a joy, and I mean that. Being excited about this class has even carried over to my running, where my mileage is building slowly. I am so glad that I have something happy to say instead of complaining about fatigue! Remind me I said that, please.
Posted by Christina at 9:59 AM 1 comment: