The First of Many Days

Tim left this morning on a business trip. How do we feel about that? Imagine the dog, who is right now staring out the door, anxiously waiting for his buddy to come home. Imagine Melina, who, when she hears me open the screen door that leads to the garage, comes running and screams, "Da-Da!" Imagine the girls, who keep saying, "I am not sure I like Daddy going away." And Aaron, well, he just says he'd like to see Daddy. AND THIS IS THE FIRST DAY!

I'll try my best to post a few sentences of each day between now and December 13th so that Timmy can read up and enjoy what he is missing. Pictures also? Probably not. To be honest, it was all I could do to get a shower, keep everyone fed, and juggle bedtime with 4 tired children. The clothes never did get folded today, and unless reinforcements arrive, those same clothes might still be unfolded (along with many other, newer, clean clothes) come December 13th.

I'll keep you posted.
Posted by Christina at 7:45 PM No comments:

I Think I'm Falling for Fall!

I stole that title from Moose A. Moose's song on Nick Jr. Aaron loves the song, and we've got it stuck in our heads around here. To be quite honest, I sort of like the song, too. I don't have all the pictures I need to convey the sort of Fall we've had around here, but the handful I am posting will be sufficient to prove that the kids are enjoying themselves immensely. 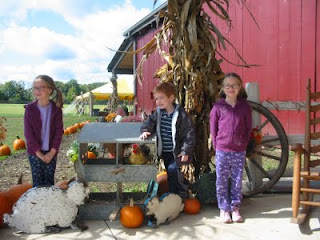 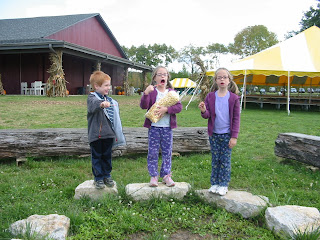 The kids love going to Bonnybrook Farms. I haven't gone with them the last couple of years since it would be too much for Melina, but I am looking forward to next year. 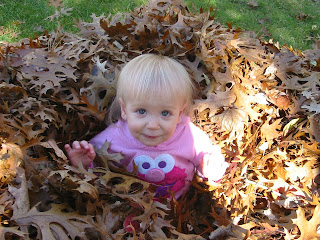 Melina loves the leaves as much as her siblings do. Tim was lucky to capture her sweet face before the other kids poured the leaves over her head.

Aaron turned 5 just after Halloween, but we celebrated the day before so as to spread out the festivities. It was quite the weekend of celebration, and because we had both sets of grandparents here, Aaron felt more special than usual, I think. The entire time the grandparents were here, though, we didn't think to take a picture of the kids with them! 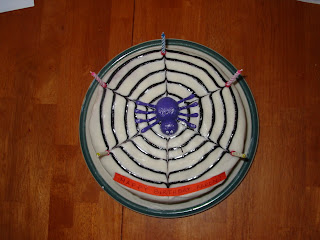 Aaron loves spider webs and spiders, so I found a picture of a cake I was able to recreate. 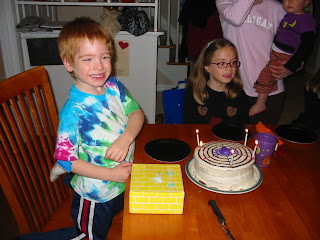 Could he be any more cheesy? 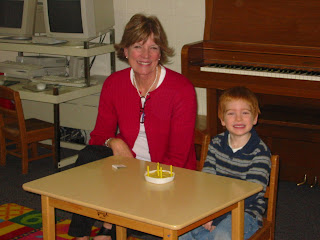 Aaron also celebrated his birthday at school. He loves his teacher. Again, the cheesy smile!

***
And finally, Halloween itself! 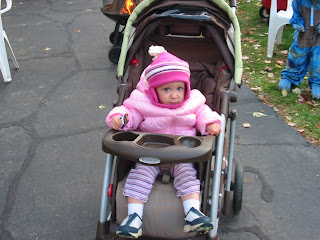 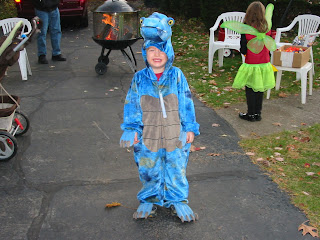 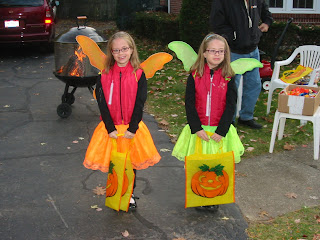 Melina didn't actually dress up. She just went for a ride around the neighborhood while Zoe, Talia, and Aaron stocked up on candy. It was a pretty nice night to be out, and the kids stayed up too late. Isn't that what Halloween is all about?
Posted by Christina at 1:13 PM No comments:

As I walked out the front door to leave for work yesterday afternoon, I called out to the girls to tell them I was leaving.

Let us all hope it stays as a game of tag for our household. We've had enough germs already this fall.
Posted by Christina at 9:55 AM 1 comment:

I thought (briefly) about trying to post 1 item a day, considering it is National Blog Posting Month (hence NaBloPoMo).

Seeing as it is November 2nd, and there was no post yesterday, it's not happening. If you'd like to actually keep up on a family whose blogger will successfully complete NaBloPoMo, check out our friend Kelsey and her family. They always have lots of good stories to share.

***
Let's keep our fingers crossed for the Phillies. They need all the help they can get right now.

***
We had a great Halloween as well as a super celebration for Aaron's 5th birthday. He informed us that he is "halfway to 10" or something like that. I hope he is as excited about math at 10 as he is now.

I don't have the pictures from this weekend handy, but I will ask Tim to load them up so you all can see some of the fun stuff we did.

Thank you to both sets of grandparents for making the trip out here to help us have such a wonderful weekend.
Posted by Christina at 9:45 AM 1 comment: