Got a Job for Bob?

Melina and I were sitting on the double bed in her room the other morning, a bit after 6 am. Aaron comes in, climbs up on the bed, and presses his nose up against one of her windows, which faces south and looks out over the 1 story roof of our family room.

In retrospect, Aaron might have been referring to the shingles. But after having not slept much the previous night, it never occurred to me to ask him if that was the case.
Posted by Christina at 1:52 PM No comments:

This post pretty much sums up how our summer is going.

Yesterday, I got lunch ready for the three older children. We didn't have leftovers in the refrigerator, so I threw together peanut butter and jelly sandwiches, cut up some fruit, and topped the fare off with some crunchy corn chips. Who could resist?!?

Zoe, that's who. As I headed upstairs to put Melina to bed, I told the kids that lunch was ready, and that I'd be down as soon as I could be. Twenty minutes later, Talia and Aaron had finished their lunches, cleared their places, and were happily reading in the living room. Zoe was still sitting at the table, looking at her sandwich. I knew why. Zoe likes salami and would have preferred to have a salami sandwich. But we didn't have salami. She might have also preferred a hot lunch (many times, I do make lunch specifically for them, not relying on leftovers). But I didn't have the time for that. I informed Zoe that her only option for lunch that day was PB and J, and that looking at it wasn't going to change that fact.

In my head, I had visions of Frances, from Bread and Jam for Frances (if you've never read it, go ahead...it's a good read). I mentioned to Zoe that it might be a great idea to eat her sandwich without complaint, as I could easily give her PB and J at every meal. Her response? She crawled under the table and pulled my sweatshirt over her head. Can you say ostrich?

I gotta tell ya, I was just too tired to yell, or spank, or spit out expletives that little kids shouldn't hear. Someone was watching out for me yesterday, because I simply pulled her onto my lap, told her that we don't always get what we want when we want it, and that eating PB and J was probably better than not eating at all, right? In the end (1.5 hours later!), she ate the sandwich. All of it.

I served pasta at lunch today.

How is Aaron doing this summer? Oh, let me count the number of times my blood pressure has risen, just because of him. Oops. I can't do that...too many times to count. Aaron enjoys playing with his sisters, but sometimes, his red-head temper flares, and any one of the following can happen: sand gets thrown, fists fly out only to land somewhere on someone else's body, words are used inappropriately at someone, toys gets stolen, etc.

Again, I think I must be too tired to react, as most of the time, I can be pretty patient with the boy. But I have to wonder, how many times can I tell him not to hit, or call someone 'stinkbutt', or that sand must stay in the box?!? Does Aaron ever listen? I think not, and I am getting tired of trying to make him do so. If anyone out there has suggestions for me, I'm open. I've recently told him to pretend I'm his teacher, as he has admitted to listening to her better than he does to me.

***
Melina is going to be one very soon, and I have not posted any new pictures of her. Next time. She has recently switched to crawling most of the time, and only using her creeping method every once in a while. She loves to scale the stairs (with one of us behind her) and looks for applause each time she goes up by one step. Her 'vocabulary' is increasing: she definitely says 'ball' and 'Shadow' along with the usual 'mama' and 'dada'. We think she's said a variation of Talia and Zoe, too, and some other words, I cannot remember at the moment. We'll be sure to put a post of her big day in July.
Posted by Christina at 8:26 PM 1 comment:

I remember someone telling me (the dentist, perhaps?) that we should always go over the kids' teeth after they have brushed, just in case they missed some food. And, that we should do this until they are 10. Ten!!! So, that has been my policy. But since the birth of Melina, I don't do the brushing routine with Aaron and the girls so much anymore. Imagine my surprise when I looked inside Talia's mouth and found she now has 24 teeth instead of 20. Zoe, too. Of course, I shouldn't be surprised, as they are 7, and eruption of the 6 year old molars usually occurs around the beginning of first grade (give or take some time).
Posted by Christina at 8:40 PM No comments:

I have been kindly reminded by a few that I never said how Shadow is doing, after having a growth removed. The growth ended up being benign, and aside from a shaved patch on his leg, he is doing well. I am really glad, as I actually would like the beast to be around for a while. The cats might beg to differ, but in the grand scheme of things, I think they all get along pretty well. 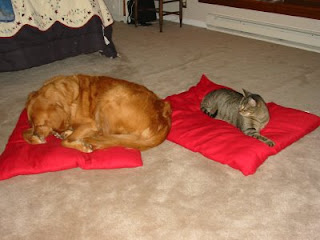 I have been trying to write this post for a bit, but the little lady isn't cooperating. I don't know if new teeth are coming in, or if she is just more interested in her surroundings lately, but I do know that napping has become somewhat of a difficult time lately. I keep telling Melina that babies take naps and that she needs to nap in order to grow, but she just hasn't been buying it.

***
Speaking of growing up, Aaron has done so overnight. I am not kidding, either. Writing about him now could be like the beginning of a Franklin story:

Aaron could count by fives and draw bee hives. He could hold his pencil correctly and draw very gently.

Aaron can probably count by twos, but he doesn't have tie shoes, so Franklin has him there. But Aaron's artwork has exploded in detail and design, he really does hold his pencil the right way (finally) and best of all, he has been dry at night! He informed me yesterday that the box of special pants (diapers/pullups) no longer belonged in his room since he just didn't need them. Aaron also told me that he didn't need help with his shoes: "Mom," he said. "I can do it by myself. I've done it before." The growing up part isn't really hard on him...it is hard on me. My little guy is changing right in front of me, and I can't stop it. Of course, I don't really want to, either.

***
Second speaking of growing up: I just realized the girls will be done with first grade tomorrow. Done. Finished. Moving on to second grade. That means they are growing older, and so am I. Lately, their maturity has been showing (sometimes) and I am glad to see it. I found the girls sitting with Aaron on the couch yesterday. Talia was in the middle, reading a chapter book to Zoe and Aaron. They were enjoying each other's company as well as a good read. I was so proud, I called Tim to tell him what I found. I thanked Talia later for sharing her talent with her brother (Zoe can already read well by herself). She smiled, but I could tell she was proud of herself, too.

And speaking of pride, the girls both earned SPIRIT pins this year. What does SPIRIT stand for? I took this from the school's handout:

Our mission is for the students to learn about Success, Pride, Integrity, Respect, Involvement and Teamwork. We talk about these words and actions everyday so students can learn to implement them into their daily lives. It is our hope that through "SPIRIT" each child has the best school experience possible. To this end, we must work together and support each other as we nuture and educate our students.

Each time a student is seen doing something that represents one of the letters of the word SPIRIT, he or she receives a brick with that letter on it. When the student has received all of the bricks, her or she gets a pin. The kids are thrilled to have accomplished the feat, and Tim and I are happy, too.

***
Just to amuse you, Melina is body slamming the dog -- over and over and over. Aaron is laughing hysterically, and so am I. The dog isn't even bothered by it.
Posted by Christina at 1:31 PM No comments: