Will you be counted?

It goes without saying that there is an election coming up. Even I, sleep deprived and barely functioning, realize that a presidential election is on the board for next Tuesday. If I hadn't already known it, the girls would have told me, as their first grade classes have been discussing the candidates. Thanks to the pamphlet that came home with them last week, we now know that John McCain likes Mexican food, while Barack Obama likes chili. Well, I like both of those, so I guess I can't use food preferences as my litmus test.

Actually, I am not taking this election that lightly. As with every presidential election, I try to think about which person I think will do the best job for the country and for me. I never agree 100% with either of the candidates, and sometimes, I don't agree with either of them very much at all. This time is no different. But like I tell my kids, "Voting is a private matter, and I don't have to tell anyone which lever I'll pull." Furthermore, I am not going to tell you who to vote for, either.

But if I could find out more information about candidates, I'd vote for someone that had these characteristics (listed in no particular order):

-Doesn't believe everything they read
-Stands up for what they believe
-Listens to what the other person has to say, even if they don't agree
-Is generous with time, talent, and if they are able, money
-Respects ALL life: insects, trees, people, the earth
-Thinks independently
-Thinks judiciously
-Judges not the other person
-Realizes that everyone is special...we're just born that way
-Doesn't underestimate anyone, regardless of what they look like

I could go on, but I actually have work to do.

But please, get out and vote, whatever your vote may be!
Posted by Timmy at 8:37 PM 4 comments:

Funny thing happened this past week. Not once, but twice. I was out with the kids at a local eatery (nothing fancy...the kind that serves not-so-healthy chicken and deep-fried potatoes), when a young lady strolls up to us and says, "Are they all yours?" What? I smiled, and nodded, all the while thinking that several kids from a nearby table MUST have latched onto my coat or something. When did having four kids become fodder for, "Are they all yours?" Apparently, four kids will get that reaction because the next day (literally, the next day), Tim and I were out with the kids and again, "Are they all yours?"

According to the U.S. Census Bureau (and I would put a link here, but I haven't yet investigated how to do that, and to be honest, just getting this post on here is a feat in and of itself due to time constraints), the number of kids per household is about 2 (give or take a little). Okay, so we are two above that. But what if we were 3 above that, or 5 above that, or say, like the Duggars (again, hyperlink here) fourteen above that? Is it really anyone's business but our own?

Of course, as I was recounting this experience to my sister the afternoon of the second incident, I finally figured out what I should have said, and what I will say the next time. No expletives necessary, just a simple "Oh, I found them in Aisle 5...do you know where the lost and found is?" will do just fine.
Posted by Timmy at 1:39 PM No comments:

Just to hold you over: 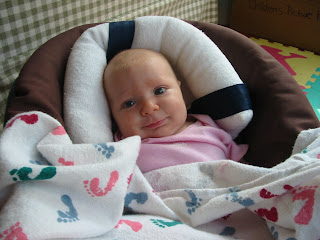 Had to throw in a more current picture of Melina. She actually doesn't like this car seat too much anymore, which means we stick around the house quite a bit. She turned 100 days on October 18; we made chocolate chip cookie bars to celebrate. Of course, she didn't actually eat any (I am not that bad of a parent!).
Posted by Timmy at 8:27 PM 1 comment:

I have decided to take this blog over, so we'll see where it leads us. Do I have time for this? I don't know. Will I post something at least every week? Yes, that I will. Somewhere between doing the laundry, dishes, cooking, nursing, teaching, emailing and sleeping, I will find the time to keep this lovely site more properly updated. Is that a dig at the previous author? Maybe. But anyone that has time to read Fark everyday has time to update a blog once a week so that his little "buckets of sunshine" can be seen by friends and family.

I do not claim to be as witty as Timmy, so if you don't feel like coming back, I understand. However, I hope you do.

I'll find something nifty for next time.

Chris
Posted by Timmy at 8:19 PM No comments: