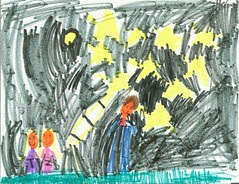 This picture shows Talia and Zoe (conveniently labelled "T" and "Z") outside with me and the telescope on a dark, starry night. Several of these stars seem to have gone supernova at the same time, so it looks like the three of us are on the verge of a major scientific discovery. I'm so excited that my eyes turned red. The moon is also out, and despite the darkness, the grass is quite clearly green. Amazing.
Posted by Timmy at 9:47 PM No comments:

A remedial course in baseball groundskeeping

After every baseball game, the players are responsible for cleaning up the field. Especially rookies. I'm a rookie. We sweep out the dugouts. We rake the dirt along the base-paths. We remove the bases and cover the base posts. We cover the pitcher's mound and home plate area with tarps. We are a grounds-keeping machine.

During the post-game clean-up (wow, back-to-back hyphenations) our manager, Terrey, had me get a broom and told me to sweep a circle around home plate. This took all of thirty seconds. "Ok, I'm done," I called out to him.

"Keep going, around and around," were his directions.

So I did. I kept going in a small circle around and around home plate, in the same direction until I felt so dizzy I couldn't walk straight. Finally, Terrey came over to me, shook his head, and said to make the circles bigger each time.

"You mean you want a spiral?" I asked. "Terrey, you have to speak geek to me."

Now, brushing the home plate area and the pitcher's mound has become one of my regular jobs. Every time, Terrey reminds me to make a spiral, and every time, I remember to brush counter-clockwise for one area and clockwise for the other.
Posted by Timmy at 9:36 PM 1 comment:

Chris had been feeling a little uncomfortable all day Wednesday, but at 38 and a half weeks pregnant, I'd guess that's the normal way to feel. We'll pick up the story around 11 pm, when contractions were about five minutes apart, but according to Chris, didn't feel like they were contractions of the entire uterus. I have no uterus, so I can only write what she described, and that's how she explained them to me. Oh, and another thing: this post will use the word "uterus," and other words that cause queasiness among beer-swilling men. If this sort of talk upsets you, skip all the words and scroll to the bottom of the post for the baby pictures.

But back to the uterus (UTERUS!). I had noticed that the contractions kind of followed the scheme of one big one, and then two smaller ones, all spaced about five minutes apart. I don't really know for certain if this was what was happening; I was just trying to estimate the strength of the contraction by observing Chris's reaction. Because it seemed that the big ones were arriving on more-or-less fifteen minute intervals, I thought we'd be safe for some time. I was not even wrong.

Around 11:50 pm, we called for the babysitter to come over, because we thought that at some point we'd be headed for the hospital, and it'd be less intrusive to call at midnight rather than some wee small hour of the morning. About 12:10 am, things really got exciting. The bag of waters broke. This didn't make as big a mess as one might expect. I called the obstetrician's office, which was, of course, closed, but the recorded message gave an emergency phone number, which I called. The answering service for the emergency number patched me through to the obstetrician's cell phone, but he wasn't answering. The on-hold music, by the way, was some classical stuff that was completely not soothing. The answering service person came back on the line and told us she couldn't reach the doctor, but she'd left him a message and he'll call us back soon. In the meantime, we called our babysitter to let her know what was happening, and she said she'd be right over.

About five minutes later, the phone rang. [Edit: the astute reader will notice that I originally placed the return phone call twenty minutes after I called the hospital. Chris assures me that only about five minutes elapsed between calls. She is undoubtably correct, but it sure felt like I was waiting for a long time.] The obstetrician was returning our call and he and I chatted some --- a little too leisurely, probably, for Chris's liking. ("Oh yes, her water broke and she's feeling the urge to push, but I've been telling her to hold off...") The net result of the phone call was the OB telling us that it was time to come to the hospital. I grabbed her overnight bag, brought it downstairs, and threw the camera, a few Powerbars, and a bottle of green tea in it. I helped Chris down the stairs, and as soon as she got to the kitchen, she needed to get down on her hands and knees because of a contraction. The babysitter arrived, and we left.

Ten minutes later, with surprisingly few expletives during the drive, we were at the hospital. Middle-of-the-night traffic made the drive a snap. I don't know if one can call a car ride uneventful if one's passenger says things like, "I feel like I need to push this baby out right now." I did ask if Chris wanted me to pull over and deliver the baby right there (because, you know, I am a scientist, and if baby delivery is anything like nonlinear optical crystals, I'm your guy), but she said just to keep driving.

I parked in a patient loading zone with my four-way flashers on. A hospital security guard told me I could leave the car there. Maybe I remembered to lock it, maybe not. I didn't take anything into the hospital except Chris in a wheelchair. I learned that I'm not very good at turning wheelchairs through 180 degrees in elevators, but these wheelchairs were awfully wide (I blame high fructose corn syrup for this), and the elevators did seem a bit narrow.

When we got to what looked like an emergency room for pregnant women, a labor and delivery triage nurse examined Chris and told us she was completely dilated and effaced, and that the baby was at +2 cm station. The nursing team said they were bringing her to a delivery room, the obstetrician was on his way, and she was free to push. Sadly, I didn't get to test my driving skills of the beds on wheels. Somewhere along the way, I got a little green tag that said "Birth Partner."

Around 12:45 am we were in the delivery room. Maybe because I can never keep my mind on the task at hand, I noticed an interesting and almost familiar accent from one of the nurses. We found out later that she's from Sault Ste. Marie, Michigan, but she doesn't know the Turcos (yes, I asked). Of course, that would make perfect sense, since Marty Turco is from the Ontario side, but my brain wasn't putting those facts together at the moment.

The doctor arrived and sat down at the foot of the bed to see how things were progressing. There were pushes, followed by moments of resting, and I really didn't know how long this was going to take. I told him my urologist joke, to which he gave a perfunctory groan and almost laugh, but I'm certain that he's telling it to all his friends now.

Well, it turned out that it didn't take long at all. Around 1:05 am, I started to notice a wrinkly thing with hair on it that could only be a head. The wrinkly head was still a few inches away from being at the exit, but it was moving along. Several good pushes later, the head was out but the rest of the body was still within, and it was already yelling at us. With another push, at 1:09 am, the rest of this person came out, and I could easily verify that this person is a girl, because as soon as she emerged, she urinated all over everything, and I got a very good look at the part doing the urinating. It was quite a bit more liquid than I expected a newborn's bladder could hold, but everyone there was glad to know that those parts were functioning properly. Actually, we also found out that some other parts passed quality assurance as well, because she, um, she voided her bowels, too.

The doctor clamped the cord and handed me the scissors. I got to do this with Aaron, and I remembered that the cord is kind of thick and strong, and the way it feels reminds me of calamari. I went at it with a strong hand, because nobody wants to look like a wimp in front of someone who delivers babies for a living.

Just after the cord cutting, a nurse and I wiped her up and I got to rub some of the vernix into her, which actually felt kind of nice, and then the nurse wrapped her up and gave her to Chris to nurse. I can't remember exactly, but I think she got a pretty good latch.

At this point, the obstetrician stood up from the foot of the bed to where gravity had drawn all the amniotic fluid, blood, Melina's urine, and other liquids I might be neglecting to mention. He looked at his scrub pants, which had a huge red stain on the rear end, and said, "I think I've just had my period." This still makes me laugh, and just goes to prove that even boys with M.D.'s and Ph.D.'s find potty humor irresistably funny. Ok, yes, that's technically not potty humor, but it's in the ballpark.

So here it all is: Melina arrived at 1:09 am on Thursday, July 10. She weighed six pounds and six ounces. Her length was 20 inches, but that looked like a generous measurement to me. On Saturday, the nurse at our pediatrician's office measured her at 19".

Eventually, I moved the car to the parking garage and retrieved the camera from the car. According to the metadata on the photographs, I took pictures between 2:45 am and 3:28 am. Sometime between 3:30 and 4:00, I left the hospital for home so I could take Zoe, Talia, and Aaron to dinosaur class in the morning. Although I should've gone straight to bed, I turned on the computer, uploaded the photos from the camera, and sent an email out to everyone I could think of, plus all the email addresses that Chris had prepared. That message went out at 5:17 am. At 5:23 am, our friend Stacy replied. I couldn't tell you what she was doing up then, because I read her reply and went to bed.

Here are a few pictures: 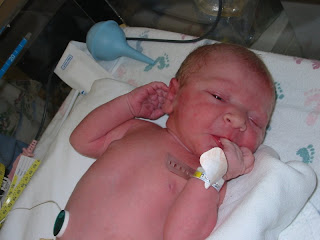 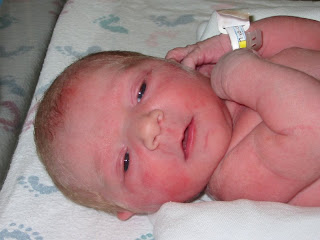 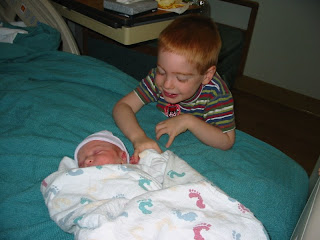 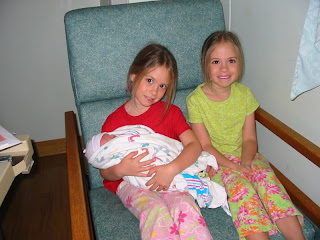 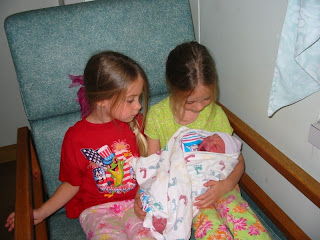