Draft Makeover #2. I had no idea I'd ever put this gem together. And by gem, you know what I really mean. In fact, I think I know why I never pushed the Publish button on this post.


Twas a Few Days Before Christmas
With SINCERE apologies to Clement C. Moore

Twas a few days before Christmas, when all through the house
Not a creature was stirring, except for a mouse.
The winter coats were hung by the back door with care,
Only because I had just put them there.

The children were supposedly all snug in their beds,
While visions of iPods whirred through their heads.
And Tim with a beer and I in pajamas,
Had just settled down for a night without dramas.

When out on the lawn there arose such a clatter,
Tim sprang from the couch to see what was the matter.
Away to the back door Shadow flew like a bat.
Tim opened the door and almost fell flat.

The moon on the dead, brown, crusty old grass,
Gave the luster of mid-day to quite a landmass.
And what to my wondering eyes should appear
But an LED sleigh and eight tiny reindeer.

With a little red driver, so lively and darin',
I knew in a moment it must be my Aaron.
More rapid than flu his coursers they came,
And he whistled, and shouted, and called them by name!

As dry leaves that before an epic hurricane fly,
When they meet with an obstacle, mount to the sky.
So up to the house-top the coursers they flew,
With the sleigh full of what? I never knew.

And then, in a jiffy, I heard on the shingles
The dancing and jumping.  And was that a jingle?
As I brought in my head and was turning around,
Down the chimney Dr. Who came with a bound. 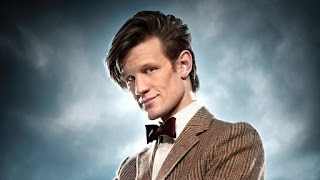 Aaron came next, in dust head to toe.
Both were all tarnished, but still seemed to glow.
"I nabbed him!  I trapped him!  Oh I'm so fond.
But where in the heck did he put Amy Pond?"

Aaron's eyes, how they twinkled!  His smile, how merry!
Dr. Who was embarrassed, his cheeks like two cherries.
The doctor looked stern, confused, and so worried.
But he laughed at himself and Aaron's misdeed.

The stump of his screwdriver Who held in his teeth.
The light from it circled his head like a wreath.
He had a long face and a flat little belly,
He certainly needed a trip to the deli.

He was skinny and thin, not much of an elf,
I gasped when I saw him, in spite of myself.
A twist of his screwdriver, a cock of his head,
Soon let me know Aaron had so much to dread.

Who spoke not a word, but went straight to his work,
And tied Aaron up, then turned with a jerk.
He lay all his gifts down, then wiggled his nose,
And giving a nod, up the chimney he rose.

Aaron gaped at what happened, so proud, so in awe.
"I had Dr. Who, Did you see it? You saw?"
I nodded and watched as Who drove out of sight,
"That's it, Aaron, I said, it's time to sleep tight."

Finally got to sit and read this uninterrupted. Love it!! Of course, I love anything that rhymes, or parodies, or has Dr. Who... so I'm really not sure how you'd ever beat this :) So glad you shared!