The second time I ran into Terry, she hugged me close and whispered in my ear, "It's so good to see you." And by the twinkle in her eye and the curve of her lips, I believed her. It wasn't long after, though, that I realized she spoke those same words to each person she encountered and that I--her friend for years--really wasn't that special.

My heart hurt when I thought of all the times we had spent together. The conversations about our children as we swirled milk into our tea, how we spoke about husbands--current and ex--while we watched our children splash in the pool. I'd see her at school, pull her to the side, and chit-chat for minutes, making us late to our respective appointments. She always had a smile for me. She always had a hug. She always made me feel as though she and I had an extraordinary friendship. 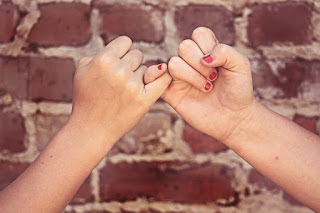 I should have known. The signs were there. A missed luncheon appointment. A text and an email that went unanswered. She defected from our book club and rebuffed my invitation to come for tea. And still, I blamed her behavior on everything else that was going on in her life.

"She's going through divorce," I'd think.

"Those boys of hers keep her busy," I'd admit.

After a while, when I realized it had been at least six months since I'd seen or spoken to Terry, I realized what had happened. She'd distanced herself and I didn't know why. But at that point, I didn't care. I had other people in my life who called when the dog died, who checked up on me when I was sick, who sought out my company when it had "been a while." I had never needed fair-weather friends before and I had no desire to start at that point.

And so she's gone from my life. The last thing I plan on doing is wiping Terry's contact information from my cell phone. I haven't told her my plan--I don't think she'd care. I'm sure I'm out of her phone at this point already. But I do wonder what I did, or didn't do, to make this "relationship" crumble. Why had she always seemed so happy to see me when in reality, that couldn't possibly have been the case? I'll never know. What I do know is that I'm moving on.

And the next time I run into Terry? I'm not exactly sure what will happen.

(This piece was inspired by the writing prompt supplied by S. B. House.)
Posted by Christina at 5:30 AM

Love it!! And the prompt came from a friend of mine telling me the story of "the second time I ran into pagans" (his exact words).