I sat in my bed, astonished, back against the headboard, knees up, supporting the book I was reading. I had been entrenched in the novel—a little ditty about a crotchety old man who, up until now, had done nothing remarkable—when Aaron had interrupted my thoughts. He'd been put to bed two hours earlier (Aaron, not the man) and I had thought he'd been sleeping. And maybe he had been...perhaps he'd gone back to his old habit of sleepwalking and sleeptalking. I guess I'd never know.

I flipped back to the last page I'd read in the book, but my rhythm had been destroyed by a red headed boy, speaking of dragons and nightmares. I closed the book, placed it on my nightstand, and then turned off my light and went to sleep.

A thump on my legs awoke me with a start. My heart raced in my chest and the dim light of the nightlight did nothing to let me know who or what was perched on my legs. It could be one of four cats, or the dog, or who knew...possibly even Aaron. As my mind cleared from the fog that sleep had placed there, I became aware of a presence unlike anything I'd ever experienced. A heat seared my legs from my ankles upward, and before I knew it, a spark had ignited underneath my rib cage. I gasped for breath and wrestled with the covers as I attempted to sit up.

"What the hell?" My eyes registered the thing that sat on my legs. About the size of a German Shepard but with a mouth much larger, I saw a winged dragon (a fire breathing sort no less) perched at the end of the bed. He moved his wings in graceful arcs, and had I not been petrified, I'd have been able to appreciate the beauty in his movements. Instead, I pulled my legs toward my body and backed myself up the bed. The headboard stopped me, but had it not been winter outside, I might have considered jumping out of the nearby window and running away. I wasn't certain my trembling legs would have been able to get me anywhere, though. 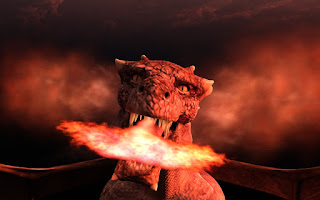 Swirling puffs of smoke danced from the dragon's nostrils and a tongue of fire leapt from his mouth as he yawned. He blinked one eye, and then the other, before craning his neck toward me, a look of curiosity in his gaze.

"What are you?" His voice held a gruffness to it I hadn't anticipated. Maybe that's what fire does to the vocal cords, I thought.

He sniffed twice and sat back a bit, toward the edge of the bed. "A girl human or a boy human?"

"Can't you tell?" I had my long hair pulled back and I sported pink fleece pajamas. I didn't particularly think that I looked like a man, but who knew what a dragon understood or didn't.

"I cannot see in the dark, although I wish I could." He yawned again and another flame escaped from the back of his throat. "The fire light helps a little..."

I wasn't sure whether to laugh, cry, or scream, but I knew somehow that this dragon, so heavy on my feet, so hot against my skin, wasn't there to harm me. The trembling in my legs ceased and I thought about what else I could ask him. I decided to simply give him the answer he sought. "I'm a girl human, but I do have a boy human. He's my son. He's down the hall."

"Hmmm." The dragon blinked twice, again, and then turned his head toward the doorway. "Down the hall, you say?"

I didn't like the sound of his voice, then. It dripped with something I couldn't identify and I wondered if I'd given up information he didn't deserve. "You can't have him, you know. My boy." I pushed myself up on my knees and shot my hand toward the dragon. His scales stung my hand, and I pulled back my arm, cradling it against my chest. I looked down at my fingers, which had begun to swell from blisters. "What the...?"

I didn't have time to say anything else. In an instant, the dragon disappeared in a puff of smoke and fell back against the mattress. I knew I needed to get up, to walk down the hall and check on Aaron, But somehow, I didn't have the energy. I felt stopped, but I didn't know by what.

(To be continued? I'm not sure on this one. It started from a prompt, but I have no idea where it's going...)
Posted by Christina at 5:00 AM

Love it! Such an interesting encounter with a dragon :)