Like most other days since becoming an adult, Connie picked up the phone to call her parents. Dad answered the phone. She didn't know where Mom was and she didn't ask. Connie could anticipate the answers: weeding the garden beds, wandering the grocery store aisles, riding the stationary bike in the basement. It didn't really matter to Connie where her mom was. The call had become more of an obligation than a tried and true how-are-you-doing sort of thing. As usual, Connie would try to talk to Dad, but she didn't expect much besides a diatribe on the state of the political system or a musing on the weather.

Connie loved her job, but the stress of it she could do without. "I'm not going in today," she said. "I'm taking the day off."

Dad didn't miss a beat.  "Again? You had a few days off with the holiday and all of that."

Justifying herself to her father seemed to be a position she found herself in a lot lately, and while Connie hated doing it, she did anyway. "Uh, yeah. But I have a ton of leave, and I'm gonna take it. It's a beautiful day to go kayaking."

"But another day off? When I was working, I never took a day off. Okay, rarely. There's this thing called work ethic."

That was it. Connie was pretty much done with the conversation. She didn't know who he thought he was, or why he felt he could speak to her that way, but really, this was it.  "Listen, Dad, I work my ass off at that job. I think I can take a few days off here and there. I have the time."

She emphasized the word time, hoping he'd get it. Maybe if he'd taken a few more days off, he'd have a better relationship with his wife and kids. Okay, that was low. Breathe. Breathe. Why not take a few days when she needed them? Being outdoors, paddling a kayak. Shit, that was better therapy than anything else she'd ever tried. Connie needed to get into that boat, stat.

"Well..." Dad interrupted her thoughts. "You mustn't work that hard. You still have a lot of ass on you!"

Connie's first instinct involved an expletive she tried very hard not to say unless it was necessary. But this was her dad and truthfully, she didn't know how to respond. She held the phone to her ear, speechless and blinked back hot tears. "I gotta go. Talk later." She pressed the end button on her phone.

Had her father really just called her ass fat? Did he have no idea how much time and effort she'd put into her health as of late? When he saw her, what did he really think of her? Connie was at a point in her life where she was healthy and happy, with a bit of weight around the middle and some on her thighs and hips and butt. That's who she was. She'd tried the not-eating route; it hadn't been good to her. But now? She ate well and exercised and she was happy. Right?

"Damn him," she muttered. "Always making me question myself." After putting the phone on silent, she placed it in her waterproof bag, grabbed her keys, and hopped in the car. The kayak had already been strapped to the top and her insulated lunch bag sat in the passenger seat. Connie was going to make it a great day by placing her fat ass into a tiny kayak. And her Dad? He could just go perform an anatomical impossibility on himself. She smiled at her wittiness. It was going to be a great day. 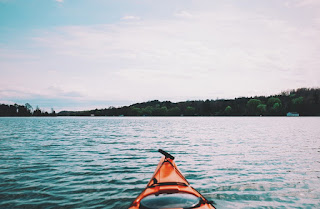 Any day with a bit of wit is a good one. Love the story.

Good wit is always wonderful. Wish I had more wittiness in my repertoire!