As many of you know, I've done it again: made a change to the color of my hair. This time, it's black. As in all over black. With my pasty skin and pale lips, I probably look like a walking cadaver, but with a little red lipstick, I feel more like Snow White.

Overall, the response has been positive. I've had a few people exclaim, "Oh my gosh! I LOVE IT!" and a few more give two thumbs up. The twins like the black hair--and want black hair of their own--and another friend told me to milk the color for all it's worth: "Become the emo/goth girl you never were," she said. 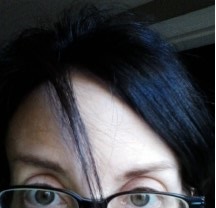 The issue I find the most interesting with respect to my own response is that I'm simply not used to all-over color. Even before I began putting a red stripe in my hair, my head could be called chameleon hair. I had the sort of hair that lightened in the sun, hair rife with natural highlights, even in the winter. Had someone asked me what color my hair was, I always said brown. But that didn't quite cover it. And now? Now there's nary a highlight to be seen, unless you count a few of the dark brown strands the girls missed when placing the dye onto my head.

How to fix that? Tim suggested putting a couple of pink streaks in and amongst the black. As cool as I think that would look, it would be tough to do. But this black is only supposed to last about 28 washes. So in a month's time, maybe I will put the pink in, and truly become the crazy hair lady some people think that I am.

Posted by Christina at 5:33 AM