Oh What a Life

Dogs are not our whole life, but they make our lives whole.
~Roger Caras

I remember the sunny summer day in 2007 that the five of us--this was in the pre-Melina days--visited my folks in Michigan. We hadn't been in the house long when my dad said, "Do you know anyone who wants a dog?"

It didn't take but a few phone calls for us to schedule a visit to meet this Golden Retriever. His owners sought a home for him because he stayed alone for over 12 hours a day. "It's not fair to the dog," they said. "We'd love to find him a great place to stay. His name is Shadow." 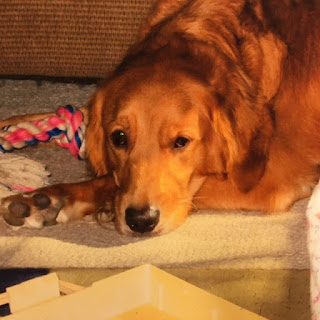 We rolled up the driveway in our minivan, three excited kids strapped into their car seats. As we all got out of the car, I felt a fleeting moment of uncertainty: what I hoped to find and what I might find could very well be two different things. But within an instant, a large, reddish bolt of fur zoomed our way. His face held soft brown eyes and an enormous smile. His tailed wagged so much I thought it would fall off. The five of us fell in love that day, and a few weeks later, Tim drove back up to Michigan for the sole purpose of bringing Shadow home to Ohio.

Here we are nine years on, in the summer of 2016, and Shadow is on this side of old. According to Totally Goldens (and most other sites I could find) , the average life span of a Golden  Retriever is 10-12 years. Some lucky dogs live to see 14, but most do not. Last summer, just after his 11th birthday, we faced Shadow's possible demise with our hemangioma scare, but after a successful surgery, we were granted a (slight) reprieve. Since that time, I've known the end was in sight. However, I have tried not to concentrate on the fact that our friend would be leaving us within a few years.

But about a month ago, I noticed Shadow hadn't been eating well and then he suffered a bout of diarrhea. We took him in for a workup, which led to an ultrasound and aspiration of lumps in his liver, which led to an inconclusive diagnosis of those liver masses. These masses could belong to one of two groups. 1. sarcoma (cancer) or 2. adenoma (benign). 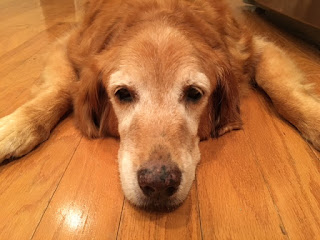 Here's the problem, though, with that information. In order to find out if the lumps are cancer or not, we need to have a biopsy done. At Shadow's age (he's now 12) and with the possibility of fluid in the masses, that procedure comes with some risks. Furthermore, if we confirm that the lumps are cancerous, the normal route would be to consider chemotherapy, which is costly and would only gain us about six months of time.

But, you might say, what if the biopsy shows that the masses are benign? There's a problem there as well: his liver simply houses too many masses to do anything. Surgery to take the buggers out isn't feasible because it would be like trying to work on a minefield. And unlike with the splenectomy of last year, Shadow cannot live without a liver.

So now, we wait. We make Shadow as comfortable as we can, and we coax him into eating with boiled eggs, sweet potatoes, chicken, and dog treats. He's still the lovable old guy he's always been. He runs to the door when we return from wherever we've gone. He salivates over salami and pizza and sliced turkey. He stares at the cats like they're crazy and he appreciates the cuddles and tickles he gets from everyone. He races to the gate to say good morning to the neighbor dog, Cody, and when people arrive (like the carpet guy the other day), he doesn't leave them alone until they scratch his chin or ears to his satisfaction. Until that normal behavior starts to wane, I'm holding onto him with a tight grip. 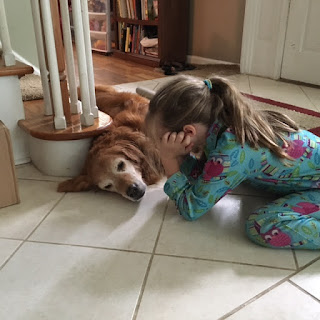 But I cannot imagine having to take him to the vet to say goodbye. If I stop to think about that scenario, which will come sooner now rather than later, I find myself overwhelmed with tears and sorrow. I will miss this dog horribly. On days that the four kids made me crazy, he was often my saving grace. He served as Aaron's playmate when Aaron was too young to go to school but too old for a nap and as Melina's guardian when she was a baby. Anyone who walks in the door, whether or not they like dogs, eventually turns to me and says, "You have a special dog there, you know."

Oh, how I know. I have never, in my life, encountered a dog like Shadow and I don't expect to find another canine friend like him. I can only hope that once he's passed on from this world, that he's as happy as he has made us.

So please excuse me if I remove myself from some of my social obligations in the next few months. Pardon me if you don't see me anywhere but at home, work, or the grocery store. Forgive me if I stumble with my words or tear up in the vicinity of your pet. I'll likely be thinking about this boy of ours and trying to spend as much time with him as I can before his sand is used up.


Once you have had a wonderful dog, a life without one, is a life diminished.
~Dean Koontz
Posted by Christina at 5:00 AM

He is a special guy, I know my kids will miss him too. Anytime you need us, we are a text or call away. I've got tears for all of you.

As you know, I am not much of a dog person but I LOVE SHADOW! Truly the best dog I've ever known. What a kind gentle soul he has - so grateful that he has helped Saba get over his fear of dogs (mostly) and that he shows up at the door every time I visit. Your special dog will be missed when it is his time to move on but please know he has made a big impact on our family and on my heart. Love you friend!

Thank you, ladies! I'm thinking we need to have a party before his time is up...