This past Tuesday, the kids and I ventured into the basement and began to clean house. We started with the bookshelf that housed the games, many of which we hadn't reached for in years. "Keep or donate?" I'd say as I held up a box. Much of the time, the kids yelled, "Donate!" and a pile of very nice toys began to grow in the middle of our air hockey table.

We moved toward the next shelf, and the next, and by the time we'd made it through the blocks (keep), the dinosaurs (also keep), and the dress up clothes in the old white dresser (donate), we'd collected all of this: 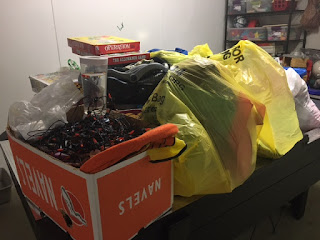 It's not the greatest picture, I admit, but if I had been planning on putting the goods in my car--a Honda Pilot--said goods would have filled much of the back seat.

We then headed upstairs to my room, where we gathered another group of items: piles that Aaron had removed from his room as well as clothes from Melina and the twins. 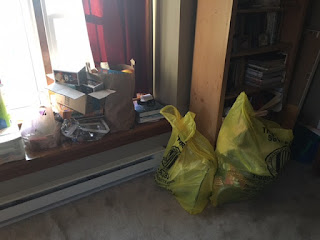 After we were done, I looked at all the bags and boxes and realized that their sheer presence bothered me. So I signed onto www.pickupforvets.org, and scheduled a pickup for the very next day. Yay! These things would be gone in under 24 hours.

I felt much lighter at the physical cleaning out of the lower part of our house. We still have far to go, but so much of that "stuff" was just that: junk we didn't use, garbage that needed to be tossed, or toys that another child might enjoy. Someone would love the Groovy Girls Dolls and the Wonder Woman costume, as well as all the other garments and trinkets and craft items we donated. (Those pictures don't even include the three boxes of books I took to the Free basket at 2nd and Charles. By the time we'd gone through the store and out again, many of the books had been taken.)

But I realized that here and now, at the end of one year and the beginning of another, that I needed to clean my spiritual house as well. So I have plans, big plans, as they say. I'm saying goodbye to negative feelings. I'm leaving behind people I thought were friends but aren't. I'm looking at the beauty in each and every moment, and I'm focusing on others instead of just myself. By doing so, I'm inviting peace into my life, something I hope that you all experience more of. 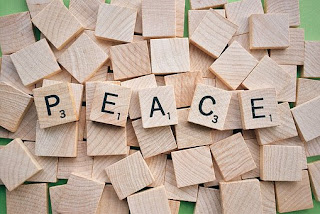 Email ThisBlogThis!Share to TwitterShare to FacebookShare to Pinterest
Labels: #spiritualhousecleaning, doing good for others