Back in 2003, we moved into a 2496 square foot, 4 bedroom home from an 832 square foot, 2 bedroom apartment. I looked around online last night and found this floor plan of the old place. 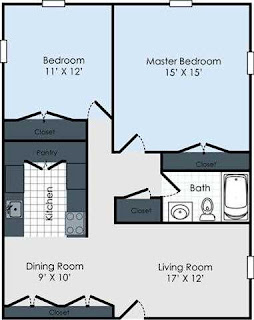 I remember the living area fondly: we had plenty of space to put all the books, CDs, child toys, stereo, and television. The kitchen and bathroom? They were both a bit small, considering we shared the bathroom with two children and two cats.

The thing I most remember from the move, though, was how empty the living room of our new house looked when we first moved in. All the toys we had in the old apartment basically fit in the family room of the new house. We could do whatever we wanted with that living room.

And so we did.  And over the next few years, the living room became the play space for two children, then three, and then four. It housed kitchen sets and bookshelves, bins of blocks and bins of dinosaurs, a kid piano and a regular piano, bean bag chairs, Barbie houses, and rocking chairs. We eventually turned 1/2 of the room into our dining area (so the dining area could become a study), and the space we were left with seemed cramped. But until the kids got older, and the number of toys became fewer, I knew life would be that way.

Color me surprised when Melina finally let go of her last kitchen set this past fall. And when we put away the Christmas tree, Tim and I looked at one another.

"That's the least amount of stuff that side of the room has seen in  years," Tim said. 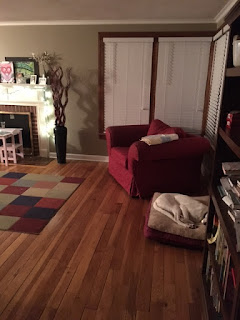 I'm still in awe at the lack of clutter and I'm not convinced the room will stay this way. But this photo proves that at least, for one day, our living room looked somewhat nice (and dare I say, grown-up?).
Posted by Christina at 5:30 AM

Email ThisBlogThis!Share to TwitterShare to FacebookShare to Pinterest
Labels: #cleaninghouse, #home, living with kids can be oh so fun