I could have gone my entire life without tasting SPAM. Seriously. As in, on my death bed, "not having tried SPAM" wasn't even going to make my list. But a week or so ago, one of the girls came home with an assignment.

Right? Which teacher in their right mind sends out an assignment like that? Apparently, it was for history class. Zoe went on to explain that they were covering World War I and that during that time soldiers could only eat SPAM and turnips. Something didn't sound right there, so I turned to my phone and looked up when SPAM was invented. And when was that? 1937. Well beyond the WWI years.


Zoe: I know when World War I was, Mom. 1914 to 1918. And I know we're studying World War I, so there must be a reason. I think SPAM is similar to something they ate.*
Me: Fine. I can get the food. And how many points will this assignment be?
Zoe: The teacher didn't say, but she did say she'd make it worth it.

What does that even mean, she'd make it worth it?

After speaking with Zoe a little longer, I began to get angry about the assignment, mainly for two reasons:


Of course, the fact that SPAM is completely unhealthy also made my blood boil, but Zoe was adamant. She wanted to do the assignment. 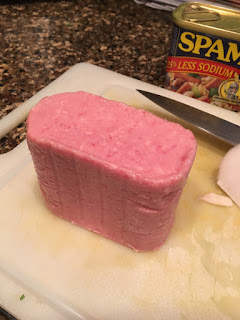 Here we are, over a week later. Zoe still doesn't know how many points she received from that asinine assignment. What she does know is that she won't eat SPAM or turnips again if she can help it.

*Soldiers during WWI ate a tinned meat, called bully beef. Reports say it was similar to corned beef and that the bread they ate eventually was made from ground turnips. Hence the food choices.
Posted by Christina at 5:30 AM

Email ThisBlogThis!Share to TwitterShare to FacebookShare to Pinterest
Labels: #studentwoes, you can make this stuff up

Ew!! There is nothing beyond threat of starvation that could entice me to try SPAM.