It was something Karen always wanted more of now that she'd managed to give birth to five children in the span of seven years.

Space at the table. Space on the counter tops. Space in her own bed, even. Just an inch or two more really, enough to keep her entire leg on the bed all night. Was that too much to ask?

And she wanted that space free and clear of anyone and anything, including her husband, Randy. His mouth always turned upside down when she said the words, "I need space." He knew when she said those words that she wanted to be free of him as well, and he couldn't understand it. "What about me isn't to like?" he said each time she asked for space.

Karen shook her head. She knew Randy didn't get it and probably never would. He didn't need space, didn't crave space like she did, like she had to have it as much as she had to have air. Or water. Or chocolate. Hell, he needed so little space, they'd ended  up with five kids. No, she knew that until the day he died, he'd need the opposite of space. What was that, anyway? 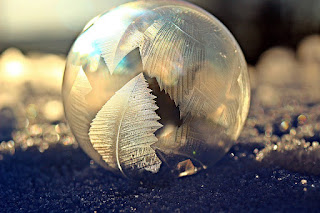 Never one to leave a question unanswered, Karen searched for the thesaurus on the shelf in the living room. She'd have preferred her iPhone, but she knew that it was in the family room, with the little guy. He'd confiscated it from her purse while she'd been on the phone with the pediatrician, and since he was occupied--and giving her the space she desired--she had no plans to take the phone away. At least not yet.

Her fingers rifled over the spines of all the books she hadn't read in so long. The Arabian Nights. Outliers. The Fault in Our Stars. Watership Down. She pulled one of the slim volumes of poetry she had there, written by someone she'd never heard of, and Karen realized that she didn't even know how that book had gotten there, in between The Dark End of the Rainbow and My One Square Inch of Alaska. She flipped open the the cover of the book, marveling at the thin paper of the first page and the quote written there: In the space between chaos and shape there was another chance. ― Jeanette Winterson, The World and Other Places: Stories

Karen took that as her cue. She tiptoed across the carpet, and peeked in at her youngest, who was still engrossed in the phone, then tiptoed back across the carpet to the kitchen. She grabbed a stool, opened the door of the pantry so it would not creak, and sat down in the small space, surrounded by canned goods, boxed pasta, and dry cereal.

It would have to do, Karen thought, before she opened the book and began to read.

Email ThisBlogThis!Share to TwitterShare to FacebookShare to Pinterest
Labels: #amwriting, #WritingPrompts, I really do need space