The other night, on a mere whim, I decided to try and make crispy chicken strips for the kids. They love that form of chicken, and even though we'd eaten out a few days before, I thought that a homemade version might still be somewhat okay for the arteries.

So I looked up how to make chicken strips and found this recipe by The Pioneer Woman. Since I made a few changes to what she did, I'll let you know what worked for me.

Instructions:
1. Put the chicken strips in a bowl and cover with buttermilk for 15 to 20 minutes (longer is okay).

2. In a separate bowl combine 1 ½ cups flour and the seasonings and mix together well. Then add ¼ to ½ cup of buttermilk into the flour mixture and stir gently with a fork.

3. Heat 1 inch (I used less) of oil in a large skillet over medium heat.

4. Remove a buttermilk-soaked strip and place it in the flour mixture, turning it over to coat it. Place the strip on a plate. Continue with the rest of the strips. 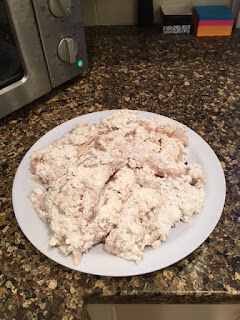 5. When the oil is ready (flour should make it bubble), begin cooking the strips a few at a time. Cook them for about four minutes or so on each side. (TPW says it should only take less than two minutes per side, but I did not find that to be the case.) When the strips are good and crispy (and golden) remove them to a plate covered with paper towels. 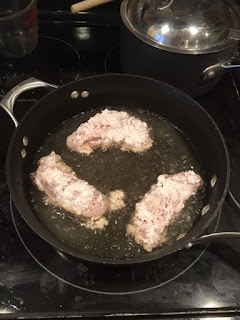 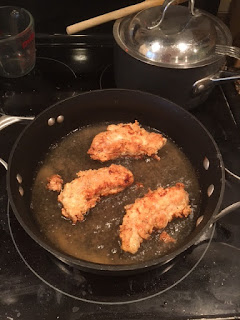 As is likely to happen in our family, three out of four children said to make them again, and one--Aaron--replied, "Meh."

I'm not a big chicken eater, but I didn't find these too shabby for a first attempt at homemade chicken strips.
Posted by Christina at 5:30 AM