She knows when she looks back on the moment later, she'll laugh. But now, as she watches her mom walk up and down the stairs and then watches her dad do the same thing, looks of confusion filling each of their faces, neither one convinced that the jacket in her hand is really her mother's, she realizes just how bad her parents' minds have become.

How and when did the trajectory turn south? Hadn't she been there, most of the days, to help them with the mundane activities? Hadn't she been shuttling them to this appointment and that, finding the time to fit in trips to the grocery store and the library and church? Maybe she'd been too close to see anything, but she really figured she'd have more time than this to make changes in her life. To make changes in their lives.

"Mom! This isn't my coat." She shakes the garment, trying to transfer her frustration from her own body to this inanimate object. "This isn't a coat that any of us have ever worn. This is your coat."

"No," her mom shakes her head. "I don't think so." Placing a hand back on the banister, her mother looks up toward the ceiling and begins to climb once again the 13 steps to the second floor.

She wonders if her mother can still count that high, to 13, or if that, too, is beyond her current capabilities. A voice interrupts her thoughts.

"I'll look again, just a minute." The voice is followed by a pair of slipper-clad feet, then khaki-covered legs, then the rest of her dad's body as he comes to stand next to her. He reaches out to the navy fleece, fingers the pilled cloth, and looks at her. "I don't think this is it. I really don't. But I'm not actually sure where she put her coat." And then he, too, goes back up the stairs. 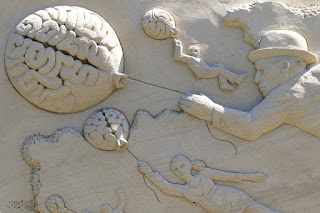 An enormous bubble of agitated laughter begins to erupt within her as she watches the circus (or the shit show, which is it?) in front of her. She knows that the coat she grips is her mother's. It's the same one Mom always wears, spring, summer, fall, and winter. The one that keeps her mother too warm in the June sunshine and too cool in the bitter wind of January. It's the coat that her parents had placed into the front closet upon their arrival, much like they have for the past 13 years.

She arches her back and adjusts her shoulders, drapes the jacket over her arm, and then pulls the chair toward her body. Lowering herself into the seat, she lets out a tired breath. She lays the coat over her knees and closes her eyes. In a few minutes, at least this episode will be over.
Posted by Christina at 5:30 AM

Email ThisBlogThis!Share to TwitterShare to FacebookShare to Pinterest
Labels: dementia is no joke, fact or fiction?, my loved one has Alzheimer's

Well written... and a nice photo