What do I know?

I picked up a couple of books on the recommendation of a person I know, mainly because--I think this is so--this person I know knows the author. (Can you follow that?) The books are in our local library, so it was easy to head over, pick up the books, and check them out.

The author's books are not the sort I would write, and while I do agree that the books are well-written (at least the two I've read), I have one major problem with them:

All the characters speak and think in the same manner.

You might wonder what I mean by that. It's not like we give a different dialect to each person, at least I don't. But sometimes, a character can speak in a manner unique to that person. The same goes for thoughts. And I thought that's what was happening when one of the main characters spoke and thought without using subjects and sometimes just in phrases. But then I realized that most of the characters spoke or thought in this way.

What do I mean? Let me give you some examples.

2. "Trying to get them in before the sale. Make the place look nice." This also from another, secondary, but more important character. I don't know about you, but I miss the subjects in these sentences.

3. "Hadn't planned on spending two hours rearranging stuff I would rather throw out." Later on he says, "Didn't follow you here, [X.]" And then, "Came for a drink, saw you being assaulted." One of the POV characters uttered these sentences (fragments?). This character is slightly closed off and pulls away from people. In my mind, I understand why he's terse and skips the subjects.

4. Shame Faith wasn't here to enjoy it with her. This was the thought of another POV character, one who is open and honest and truly, shouldn't speak/think this way.

Now before you think I'm being picky, I want to say that these instances were not examples of when a writer drops the "You" at the beginning of imperative sentences like, "Walk the dog," or "Put on a coat." And sometimes, in dialogue, or even in the narrative, we skip the subject because the phrase follows the sentence before. But for all the characters to use this technique? I found myself having trouble remembering who was speaking. Thus, I was, at times, confused.

Confusion is not something you want to cause in a reader, in my opinion. But then again, this writer had both a literary agent and a slew of published books. So really, what do I know? 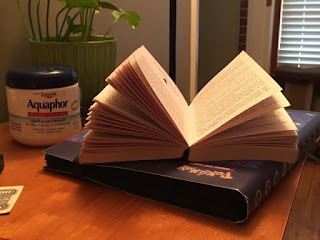 Email ThisBlogThis!Share to TwitterShare to FacebookShare to Pinterest
Labels: #amreading, #amwriting, what not to do

"All the characters speak and think in the same manner." ...gargh! This bugs me so much when I'm reading.

A really good story for characters having very different ways of talking is Redwall. If you've never read it, I would highly recommend. That author is amazing at creating differences in speech and way of life for each group of animals.