With the onset of spring and summer comes a manic impulse to clean house. After moving things around in the girls' room and Melina's room, I've started on the basement. So far, we've taken out loads of recycling to the garage, moved out two interior doors we've never used, and thrown away old and dusty alcoholic beverages (believe me, these were the kind that do not get better with age). None of what I discarded held any sentimental value to me. Until I reached the Noah's Ark lamp.

The lamp was the first one I bought the girls, while they were still in utero. We didn't know the twins were two girls and their bedroom was so small, we opted for the simple lamp I found at Meijer. Religion had nothing to do with my choice; I simply liked the animals carved into it. Aaron also used the lamp, and so did Melina, until we bought her a taller more Melina-like lamp. But much like Melina is wont to do, she couldn't part with the lamp, and neither could I. So she used it in her make-believe office until last April, when I moved it to the basement.

At the time, I thought I could hold onto that lamp. I even said, "It is clear that the lamp actually does have a place in our home. Forever." But I realize now that the lamp is just a thing, and that while it brought us great joy for many years, it still has so many lives yet to lead. Somewhere else. I'm confident it can find a place to live that is much more suitable than our dark and dusty basement. I'm also confident that it will bring great joy to other little girls and boys.

So the walk up from the basement with the lamp in my hands was not filled with remorse. I gently placed the lamp into a bag, and then took it out again, thinking that I should take a picture of our friend. I wanted to make sure that even though the lamp would not have a physical space in our home, it would still be here, in our hearts. Sappy thought, isn't it? 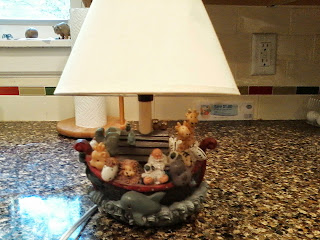 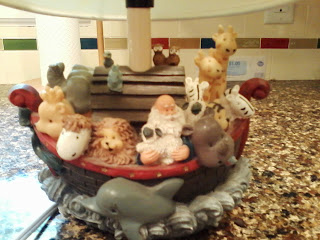 Posted by Christina at 8:24 PM